Success or crash? Or something in between.. 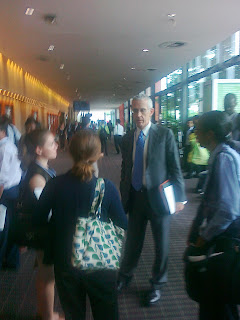 Walking the corridors of ICC in Durban I saw Todd Stern, the US envoy on climate change and the leader of the US delegation here in Durban.
That man has a lot in his hands and maybe on his conscience for the climate change negotiations. Some years ago there were some hope that US could play a constructive part in the climate regime. Today no one counts them in. The discussion is centered around those who are willing to take the situation serious, which is not the case from US officials who actually seems to believe that you can postpone the reaction of the planetary system! And they are still the worlds second largest emitter as country and per capita the highest, if you don´t count some of the extreme small gulf states

Why are the US so passive and also sometimes obstructing? There are of course many reasons but one must be the climate sceptics but were are all the people of faith in US? Why can´t they speak out about the injustice in how we treat the natural resources? Were are the preaching about the role of human to protect the gift of life in the world we living in? The protection of the equilibrium of the ecology that we are depending on? The responsibility to act with the must vulnerable in our mind?
I know that there are good signs in the faith families in US but they also need to influence the society and the debate and the decision makers.
Well, that is not only true for the US, it is a task for the whole worlds faith communities. That could make the job of Todd Stern a little lighter and a more constructive for the climate and the justice...
Posted by Henrik Grape at 8:56 AM